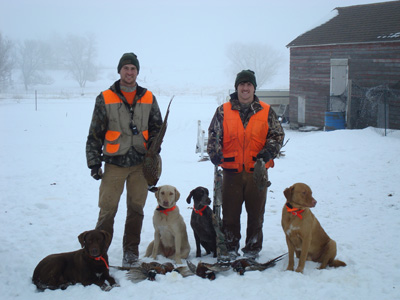 Kevin and Kyle grew up in Bristol, South Dakota where their fascination for wildlife was instilled early in their youth by their parents and their grandfather. Hunting and fishing were activities they both anxiously anticipated as the seasons progressed each year. Hunting and fishing, however, were more than just a desired activity; their family also depended upon wildlife for sustenance. Indeed, that necessity for survival instilled a great amount of respect in the boys for wild things and wild places. The strong desire to be associated with wildlife has manifested itself in both their career path and daily lives. Both Kevin and Kyle chose to pursue a career in wildlife science. Kevin obtained BSc and MSc degrees in Wildlife and Fisheries Sciences at South Dakota State University, and a PhD at Idaho State University. Currently, Kevin lives with his wife Sheila, and 3 kids, Sierra, Ainsley, and Chasen in Laramie, Wyoming. There, Kevin is an Associate Professor in the Haub School of Environment and Natural Resources at the University of Wyoming. Visit the Ungulate Compendium to learn more. Kyle also obtained a BSc and MSc in Wildlife and Fisheries Sciences at South Dakota State University. Kyle is a District Conservationist for Natural Resource Conservation Service out of Watertown, South Dakota. Kyle lives with his wife Danielle, and 4 kids, Asher, Easton, Evoleht, and Aurora in Wallace. The study of wildlife has allowed Kevin and Kyle to develop a comprehensive understanding and appreciation of animal behavior and anatomy, which has accentuated their abilities as taxidermists. Furthermore, both have competed and won numerous awards at taxidermy competitions in both North Dakota and South Dakota. Although Kevin and Kyle specialize in different areas of taxidermy, in combination, they comprise one of the leading taxidermy teams in the industry. They only hope that the pieces they produce as taxidermists glorify God and His creation.